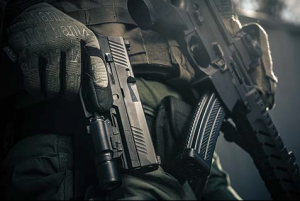 To paint in the broadest of brush strokes, the P320 is a lesson in one-upmanship from the Swiss-German engineers to the highly regarded Austrian outfit known for revolutionizing the modern handgun: Glock.

In fact, in late December of 2016, both Glock and Sig Sauer were apparently notified that they were the 2 finalists in the MHS competition.

In almost every major aspect, the P320 is what you might call a Glock clone. Many handguns have made a reputation out of making improvements upon the polymer handgun platform attributed to Glock. Springfield Armory’s XD series comes to mind. Ruger’s SR and Smith and Wesson’s M&P pistols as well.

RELATED: The 7 Finalists in the US Army’s Handgun Competition

The P320, like 5 other finalists in the MHS competition, is a striker-fired polymer handgun, with similar controls and a similar profile. The full-sized P320 has a magazine capacity of 17 rounds, with an optional threaded barrel, high quality controls, and excellent sights.

But it was by no mean alone in that. The MHS specs called for tight grouping, ambidextrous controls, a Picatinny rail, among hundred of other requirements. All of these handguns met the requirements more or less. The P320 won for a different reason.

Interestingly enough, the P320 was Sig’s first ever striker-fired polymer handgun. So, as we said, the P320 was literally designed to be a Glock killer. Incredibly, Sig beat out the big dog with its very first attempt.

Here’s the thing, if you held the Sig in your hand you probably say it’s roughly equivalent to the Glock. It’s extremely dependable, durable, accurate, and all that other good stuff. So is the XD, the Beretta APX, the CZ, etc…

We believe there’s one simple reason that the P320 took the top honors in the MHS contract: That “M” stands for Modular.

The P320 is far and away the most modular handgun in the bunch. It may be the most conveniently modular pistol on the market. Users can literally swap out almost all of the P320’s components by hand, without a single tool 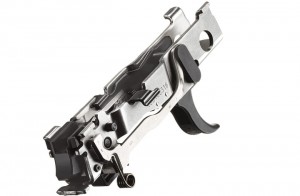 When it comes to the P320, the actually “gun” as the Federal government defines it, is the funky piece of metal you see in the picture. You can see the serial number as well.

This unit, comprised of the trigger assembly and striker mechanism, can be removed in seconds from the frame and swapped out. Want a different slide? Barrel? Smaller frame? All of these pieces are interchangeable with the “gun.”

Thus, the Army can utilize the same familiar and well-designed components in all sorts of different configurations. Once you learn about one P320, you know about all of them.

There’s a definite advantage to having a completely interchangeable platform across your entire army. There’s probably also a cost saving there as well.

The true breakthrough with this weapon, as well see it, is that the Army gives up nothing in terms of quality or durability, while gaining the modular edge.

Sig Sauer is second to none in quality and design, even when compared to Glock, Beretta, or Smith & Wesson. The durability and reliability concerns just aren’t there.

Until now, you may have been a Sig fan, or maybe not, but almost everyone agreed that they make a nice handgun. The primary fault line between Sig fans and others was that Sig stuck with the hammer-fire design.

For those who love a good striker-fired weapon, now Sig has one for you.

RELATED: Learn more about the 6 runners up