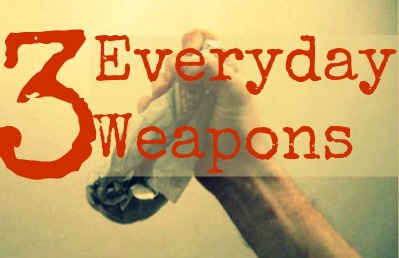 It goes without saying that most members of the self-reliance community prefer to be armed with some type of weapon when they go outside the home. Many members in the community carry concealed firearms for this purpose, when and where the law allows.

Concealed carry is not available to all people in all areas, however, as state and local laws differ greatly throughout the nation. The vast majority of survivalists I’ve observed prefer the convenience of a pocketknife.

Question: How confident do you really feel about your knife fighting skills?

Unless you’ve been trained in martial arts, the answer should be a resounding “Not very.”

Edged weapons take advanced training to wield effectively. And as we’ve all heard, the chances of having your own blade turned against you are very high if you’re not properly trained.

At home, where our defenses are strongest, we rarely spend time considering the devastating readymade weapons lying around. Why would we need to? However, should an assailant come after you at a friend’s home, or in a public  place, an improvised weapon may well make the difference in who goes home… and who goes to the ER (or the morgue).

Here are a few common objects that can be converted into devastating weapons in seconds: 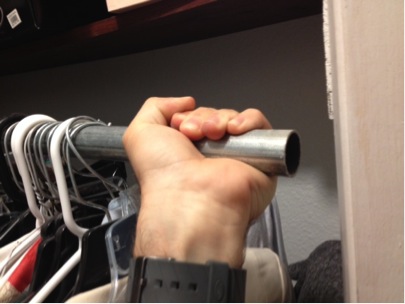 Closet Rod – Simply open the nearest hall closet, lift up on one end of the closet rod and allow all the hangers to slide off onto the floor. Instantly, you’re holding a 4 to 8 foot staff-like weapon that will give you both reach and momentum to use against an attacker.

Wooden rods will work great as an improvised baseball bat, but metal closet rods make even more gnarly weapons. Metal rods often have sharp edges on their open ends. Thus, you can both swing them at an attacker and stab an attacker in the face or abdomen. Use your imagination; it can be pretty gruesome.

Chain Lock – A bike chain lock, if you’ve ever thought about it, is a readymade deadly weapon. Several of the most popular locks on the market are made from highly reinforced, thick, chain links and held together with heavy locks that are just made for swinging. 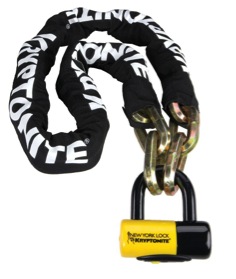 Even one of the lighter chain and lock combinations commercially available make great weapons that extend your effective reach and keep attackers at a distance. Even a glancing blow to the hand of forearm will do serious damage to an opponent. A direct hit to the head, neck, or torso could easily be an instant “fight ender,” or worse.

Last, the fire extinguisher itself can be used as a blunt force weapon as a last resort. Fire extinguishers are both heavy and metal; both are good characteristics of a club-like weapon.

BONUS: Newspaper – Newspaper can be found pretty much anywhere. What few people realize is that it can be converted into a devastating weapon in about 42 seconds. Simply roll it up as tightly as you can manage, then fold the roll in half once. This will give you a short, super strong baton known as a “Millwall Brick.”

This weapon was developed by European soccer hooligans and can be quite devastating at close range. Using it is simple; just swing the short club at your opponent’s head and/or neck. You’re not necessarily trying to hit a specific area, just to make good contact. Even if your opponent blocks the blow with a hand or forearm, they’ve taken damage in the exchange.

The downsides to this weapon are the time it takes to roll the newspaper up and its relatively short range. On the other hand, this weapon is incredibly easy to make and quite easy to conceal.

What other everyday objects can be turned into lethal weapons at a moment’s notice?