Any seasoned investor will tell you that what goes up in a hurry is likely to come down the same way. And to the surprise of very few in the investing community, the incredible boom in Bitcoin prices over the last few weeks — when the decentralized cyber currency traded at highs of $266 — ended just as dramatically.

As of today, Bitcoin is trading at around a much more reasonable $75. There are a number of reasons for the bursting of the Bitcoin “bubble,” as it is still considered an experimental currency. But the main reason for the current loss in Bitcoin value isn’t purely market driven…

In fact, most of it has to do with one of the oldest tricks in the book: Sabotage. 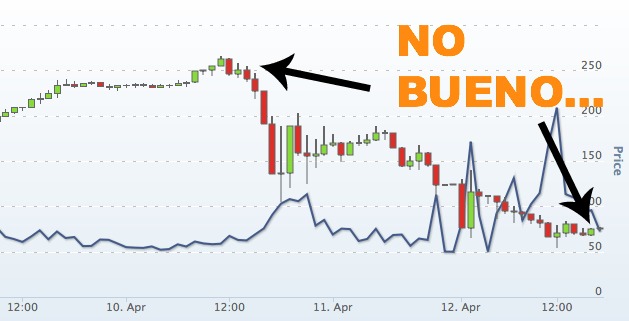 Because Bitcoin is still young, the vast majority of the currency’s trading is consolidate to a single exchange, the MtGox. Thus, take out the MtGox, and you take out Bitcoin…

Hackers have done precisely that. Through a barrage of DDoS attacks (AKA denial of service attacks), hackers shut down the MtGox for extended periods of time during one of the greatest run ups in value that any currency has recently seen. These attacks, right in the middle of the currency’s shining moment, has shaken confidence and deflated values.

Make no mistake, we are witnessing something historic here, patriots. Bitcoin is the first of its kind, a new completely anonymous, untraceable currency in which to reliably store and trade your wealth… financial history in the making.

So who would want to interfere with that? And why?

Let me ask you a quick question, if you were the Federal Reserve, or the ECB, or the People’s Bank of China — would you want a new competitor? Especially one that is untraceable and untaxable?

Of course you wouldn’t. You would want to undermine the confidence in the new currency as it emerges on the world stage. Well, mission accomplished.

But central banks aren’t the only entities with a motive to sabotage the Bitcoin. Any number of groups may find a way to exploit the Bitcoin craze. For example, investors in the currency exchange market may find ways to profit from Bitcoin’s devaluation.

European mega-banks stand to lose out as well, as weary depositors in Cyprus, Spain, and Portugal withdraw their savings and look to invest in Bitcoin.

Round up the usual suspects…