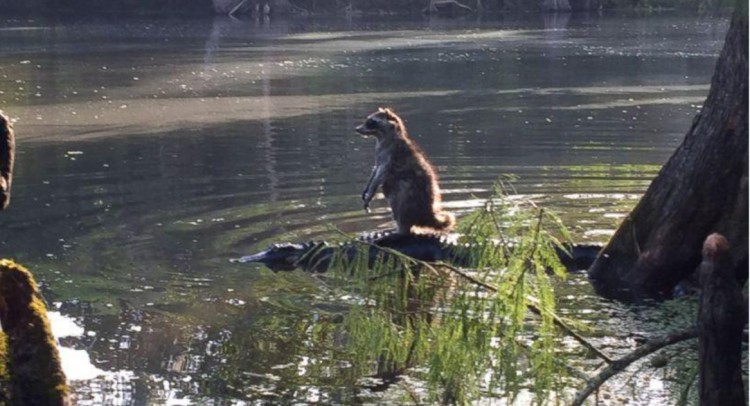 A man captured a rare image while out walking in the middle of a national forest in central Florida this week: an image of a raccoon riding an alligator. The man, Richard Jones, seemed to be at the right place at the right time to snap a photo of what appears to be one of the strangest test drive situations ever. He told reporters that he took the unusual snapshot while walking with his family in the Ocala National Forest.

Jones told television station WFTV that he “snapped a lucky picture right when the gator slipped into the water and before the raccoon jumped off and scurried away.” Jones said that he suspected that the raccoon ran and hopped on the back of the reptile after his son startled it. Jones went on to tell WFTV that “Without the context, you’d think the raccoon was hitching a ride across the river.”

The Internet was taken by storm after people saw the photo, and loads of comments about the coon/gator sensation made their way on to news sites and social media.

Some people showcased their admiration for the raccoon:

Racoon Rides an Alligator Like a Boss! http://t.co/M5FbwjiQqN via @boredpanda

Others took this opportunity to make a political statement:

There were also those who took the gator’s point of view:

And, of course, businesses tried to cash in on the trending topic:

We have no #alligator rides. We have #sup #kayak #raft & #canoe, but than again- you ain’t no #racoon eighter. 🙂 #FL pic.twitter.com/W574qPZBWD

National Geographic spoke to several biologists and photography experts, and it turns out that this once-in-a-lifetime picture might not be all it’s cracked up to be. The biologists all indicated that this type of behavior is so unusual that it seems unreal, and one local newspaper believes that the image was faked because “the raccoon seems out of proportion… it almost looks like a taxidermy piece.” On the other hand, at least two photography and computer manipulation experts agree that the image does not appear to have been created in Photoshop, but they cannot rule out the possibility that it was staged.

Whether the image is real or not, it definitely captured the attention and imagination of a lot of people. As the tweets above point out, some people love the idea of a raccoon riding a gator as if it was a horse, but others want to see the alligator take a bite out of its unexpected passenger. What side are you on: #TeamRaccoon or #TeamGator?