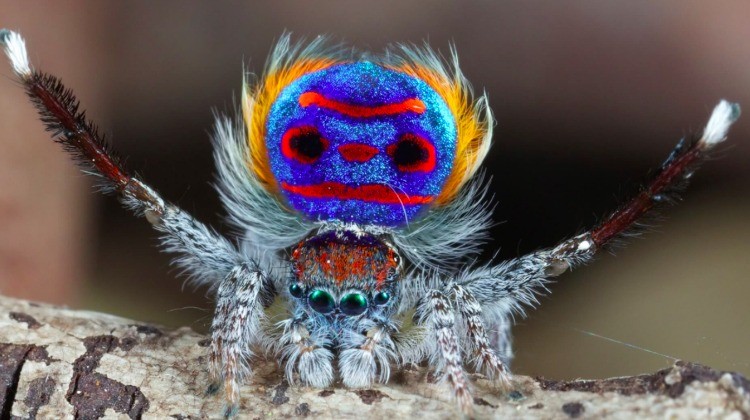 These tiny Australian spiders are one more example of just how amazing Nature can be. This video shows how these male jumping peacock spiders display the stunning color patterns on their abdomens during their courtship dance.

“The jumping spider family (Salticidae) contains more than 500 described genera (like the Maratus genus, also known as peacock spiders) and about 5,000 described species, making it the largest family of spiders with about 13% of all species. Jumping spiders have some of the best vision among arthropods and use it in courtship, hunting, and navigation. Though they normally move quietly and fairly slowly, most species are capable of very agile jumps, notably when hunting, but sometimes in response to sudden threats. Both their book lungs and the tracheal system are well-developed, and they use both systems (bimodal breathing). Jumping spiders are generally recognized by their eye pattern. All jumping spiders have four pairs of eyes with one pair being their particularly large anterior median eyes. 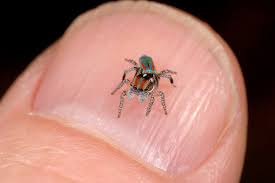 In addition to using their silk for safety lines while jumping, they also build silken “pup tents”, where they shelter from bad weather and sleep at night. They molt within these shelters, build and store egg cases within them, and also spend the winter in them.

Jumping spiders are generally diurnal, active hunters. Their well-developed internal hydraulic system extends their limbs by altering the pressure of body fluid (hemolymph) within them. This enables the spiders to jump without having large muscular legs like a grasshopper. Most jumping spiders can jump several times the length of their bodies. When a jumping spider is moving from place to place, and especially just before it jumps, it tethers a filament of silk (or ‘dragline’) to whatever it is standing on to protect itself if the jump should fail. Should it fall, for example if the prey shakes it off, it climbs back up the silk tether.