As the weather heats up, the demand on the US energy grid skyrockets with each air-conditioner that clicks on. While the grid itself is duct taped together in many cases, there is overwhelming evidence that terrorists and foreign hackers are waging work on your utility company.

A security company has found malware code that, if deployed and activated, can take control of all substation circuit breakers and switches. In other words, the ability to cripple our nation is within the hands of hackers, and even though government officials are working on the problem, they may not be able to come up with a solution in time.

The risk of failure increases with each passing day, but unfortunately preparing for a blackout isn’t your greatest concern. Imagine the level of panic, confusion, and unrest that would boil over if the electricity went out, which means no internet, data networks, or TV…

Due to this, there’s never been a better time to prepare for an extended power outage. Still not convinced? Take a look at some of the most disastrous things that are practically guaranteed to happen during the next major blackout. 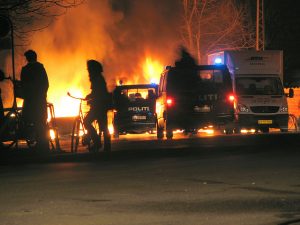 Let’s face it; America is increasing on edge, and a lot of people are only one small excuse away from exploding. This isn’t a political thing anymore, ether, because people on all sides have been showing signs of feeling more agitated and, quite simply, fed up.

We’ve been having massive protests and there’s been an increase in violence in some areas. When the next major blackout comes, how these angry people will react is anybody’s guess…

But here’s the most like scenario: It may start off as people gathering together for comfo, but things will almost undoubtedly go bad very quickly, especially if an extended power outage happens during the summer.