Though some may call it superfluous, ridiculous, or a waste of perfectly good ammo… Texas Sen. Ted Cruz calls it “cookin’ breakfast.”

At Patriot Caller, we’ll call it what it really is: A shameless attempt to get the Republican presidential candidate some free publicity… as well as an apparent misuse of the term “machine gun.”

Still, we do believe it’s important that you, the American voter, gets an opportunity to see your presidential candidates as they shoot a firearm. It just seems practical. If we’d seen the way President Obama handles a shotgun, would he have been elected? It’s hard to say. 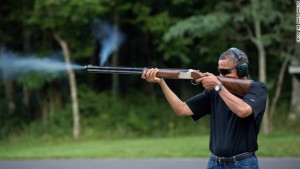 Apart from erroneously calling his recipe “machine-gun bacon,” when the weapon doesn’t appear to be fully automatic, the Senator looks moderately comfortable with a firearm. We’ve rated his performance as a 3/5 stars.

We suppose the Cruz campaign decided that “Semiautomatic Rifle Bacon” just didn’t have the right ring to it. That is giving his campaign the benefit of the doubt, however.

How comfortable do you think Ted looks with a rifle? Just as important, does this video make you like Cruz more, or less?