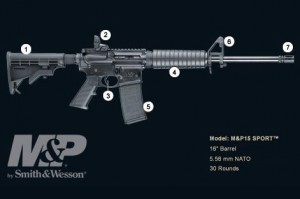 firearms that, for whatever reason, tend to leave an exceptionally good impression with shooters: Browning shotguns, Winchester lever-action rifles, Colt 1911s… and of course the AR-15.

The AR-15 is accurate, easy to operate, lightweight, and of course it can hold plenty of ammo. If you’re truly going to be ready for anything, and that “anything” might include holding off a gang of zombie hogs pillaging your farm, a bolt-action deer rifle simply isn’t going to cut it.

Those are a few of the reasons that the AR-15 has become the hands-down favorite among the self-reliance movement. It brings the reliability and functionality of a military small arms rifle together with the affordability of a civilian model in a nice compact package.

But unlike some of the other “classics” in the firearm hall of fame, the AR-15 doesn’t enjoy the same level of quality across all models. That’s because the AR -15 (which stands for “Armalite Rifle 15,” named after the original design firm) is actually a design pattern, reproduced by literally dozens of different manufacturers.